Message of Solidarity to Ukraine on behalf of FUCE Board

On behalf of the members of FUCE, I wish to express in the strongest of terms our shock, anguish and condemnation for the unjustified and unprovoked attack and invasion of Ukraine by the Russian Federation. We express our prayerful solidarity and closeness with the students and staff of the Catholic University of Lviv, an esteemed and valued member of FUCE.

We share the anguish and the horror of so many at the unfolding atrocities, the senseless loss of human life, the indiscriminate suffering inflicted on innocent people and the cruel displacement of many Ukrainians from their homes and homeland. Europe and the world have entered into a dark moment in its shared history, one which has the potential to destabilize world peace. We echo the sentiments of Pope Francis : "Every war leaves our world worse than it was before. War is a failure of politics and of humanity, a shameful capitulation, a stinging defeat before the forces of evil." We support the call of Pope Francis to all Christians and people of good will respond with the ‘weakness of prayer and fasting’ against the lethal powers of death and destruction unleashed by this invasion and occupation on Ash Wednesday, 2 March. We join our voice to the worldwide chorus calling for an immediate end to this war and a resumption of diplomatic efforts to find a peaceful and just resolution. We call on our political leaders in Europe to impose meaningful, real, hard-hitting sanctions that will rapidly undermine the Russian military assault. In this dark hour for humanity and Europe, we salute the heroic people of Ukraine in their brave struggle and stand against this barbaric invasion of their beloved country in defense of freedom, democracy and the rule of law in Europe. Echoing the appeal of IFCU, I strongly encourage our members to offer what practical support possible to the students and staff of the Catholic University of Lviv. With all who promote peace, justice and freedom, we embrace the Ukrainian nation with our prayers and solidarity. 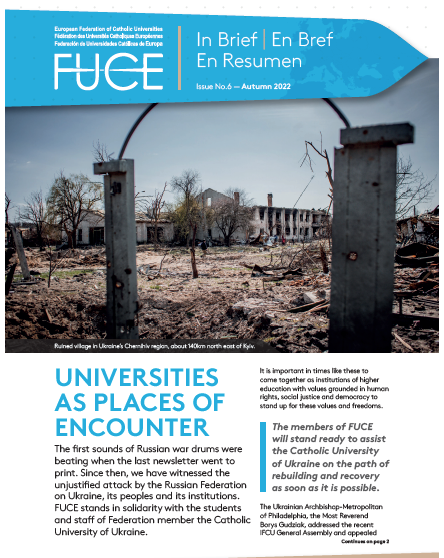 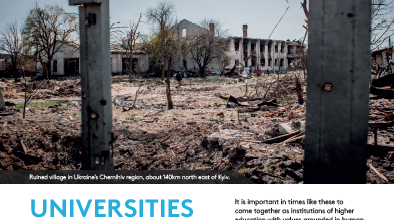